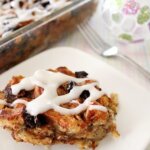 This Cinnamon Roll Bread Pudding can be a breakfast or a dessert. If we serve this for breakfast, we like to have it with maple syrup on the side, little smokies and some fresh fruit.

This post may contain affiliate links. As an amazon associate, I earn from qualifying purchases. See my full Disclosure Policy for details.

Today, I’ve got a Cinnamon Roll Bread Pudding recipe that is perfect for the holidays. Can you believe Thanksgiving is THIS week?! Ummmm, I haven’t even got my stuff for our meal yet …. I guess I better get busy, huh? It’s on my list to do in the morning …. I’m just hoping that despite my procrastination, my local store still has everything I need! Is anyone else a last minute shopper?

As much as I’m not ready for it, the holiday season is upon us. Thanksgiving is just days away …. and Christmas will soon follow. Seriously, wasn’t it just summer the other day?! I’m not sure how things are in your house, but we like to have a “special” breakfast for Thanksgiving, Christmas and Easter. By special, I mean, something we don’t really eat any other time of the year. They’re usually super indulgent dishes …. which is why we don’t have them too often!

This Cinnamon Roll Bread Pudding is an exception …. we still don’t have it too often – but we definitely don’t always wait for a holiday! You can make this with homemade cinnamon rolls that you have already cooked – or you can use up leftover cinnamon rolls to make something a little more fun and special!

Other recipes you may enjoy

Store any leftovers in the refrigerator.

Did you make this recipe?